A bizarre Christmas horror story, following a somewhat Scrooge-like story line.  Did you ever play the game Bully?  Remember the drunk Santa Jimmy helped out?  The main character is that guy, only a little younger.

A group of flawed characters, drunken santa, a dysfunctional cop, the local rich scrooge, and a hit and run driver all try to escape Krampus and his legions as they all reap what they've sown.

It's amusing, but the plot was a bit lacking and the ending left a lot to be desired.  The group of scrappy kids were probably the best part of this story.

This one was beyond strange.  It's a story of blind trust, betrayal and revenge.  In the future fashion has taken on an (even more) dangerous fad, parasitical body modifications.  Skeletal pseudo punks (Neumods) pose braced against the concrete with tape worms visible under their stretched skin or genetically engineered leeches glowing with Rave colors across their bodies.

On the edge of this scene is the newest and most dangerous mod, a modification that would link two people together, one completely dependent on the other to live, two become one.

Dirk, our main character, is completely in love with Teralyn, a leader in the Neumod movement, always on the edge of cool and quick to abandon old trends and lovers.  But, Dirk trusts her and after a dangerous and illegal surgery puts his life in her hands.

It doesn't take long for Teralyn to bore of taking care of Dirk and her abandonment means death for him, he can't survive without linking to her.  Luckily he has friends and on deaths door he reunites once more with Teralyn for one more surgery.

It's a creepy story about lust, love, betrayal and the cut-throat nature of society, where some are given license to take advantage just based on status and celebrity and not punished for their irresponsible actions.

Sam Alden is another artist whose work I follow.  I really enjoyed the two stories collected in this book, Household and Backyard.  One is about two siblings sharing their memories of their father, and dealing with their mixed up feelings.  Household was my favorite of the two and is about a commune where one of the kids totally disassociates and begins living in the yard as a dog.

Both comics have a subdued quality that I find so true to life.  Things that seem bizarre to others, like why we do certain things, or have different relationships with our families/friends than what the majority would consider 'normal' isn't bizarre to the people living it, it's just life.

Two perfect slice of life comics that engrossed me in their worlds.

Perhaps you have to like the television series to enjoy this, but I found it pretty boring.  This adaptation of Ichabod Crane is perhaps the most ridiculous I've ever seen.  It's like Angel (the Buffy the Vampire Slayer/Detective spinoff), it jumped the shark before it ever aired.

Basically, items across Sleepy Hollow, New York, cause people to go nutso, imbued with demonic entities trying to bring about the apocalypse.  Ichabod Crane who somehow pulled a Rip Van Winkle and woke up in the present day, teams with local detective to solve these diabolical crimes.

The artwork is good, but not unique.  If you like supernatural goings on with a bit of a procedural bent, try this out.

Creepy, creepy, creepy.  The story revolves around a bishoujo girl and her sweet crush on her...brother!?  Yes, a sweet love story about a (thankfully) unrequited incestuous crush.

As I look at other reviews of this book I'm baffled by the fact that reviewers don't seem to mention this bizarre aspect of the novel, or just say it's 'cute.'  It would be cute if she wasn't quite so enamored and it was more like an brother as a hero type story, but it seems she's sincere in her beyond familial affections for him...and it's just creepy as hell.

Truthfully I was so weirded out by the romance aspect of this story that I couldn't tell you what the plot was about.  The main character is in class 1, with a higher magical ability than her ugh beloved bro, who is barely able to magic anything and therefore gets bullied.

Too weird for me.

Okay, moving on.  Here is a manga about a hikkikomori otaku who gets kicked out of his house when his parents die.  Then he gets hit by a truck.  Then he is resurrected in a fantasy world as an adorable little kid.  Actually, I think he was literally born and went through being a baby too, which thankfully is skipped over. Weird enough for you yet?

So, this pervy otaku is stuck in the body of a little boy, which in itself is creepy, yet also a little funny.

His parents are undecided about how they want him to grow up, will he be fighter like his dad, or a mage like his mom?  Because of his 34-year old otaku intelligence he is able to use magic from a young age, so his parents bring in a tutor (who of course is an adorable big chested tsundere (nice when alone, but gruff when around others)).  At first he gives into his perverted otaku tendencies, but soon decides to live a better life from then on.

This volume follows his childhood adventures, fighting with bullies, making friends and convincing his mom to forgive his dad when the maid gets pregnant.  Yeah, normal stuff like that.

This is really one of the most bizarre mangas I've read (which says a lot) and yet it kinda works too.  I'll probably check out another volume of this one. 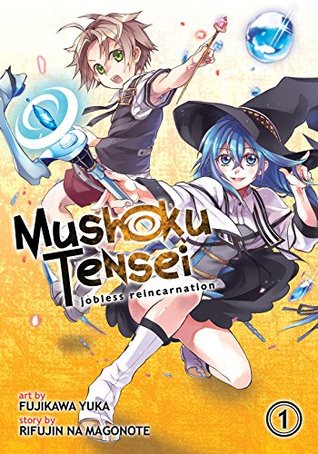