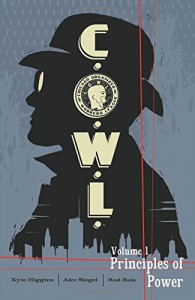 The Chicago Organized Workers League united a group of super powered people to protect their rights as they protected the people of Chicago against the Six a group of villains bent on world domination (and all that).

However, as the group finally sees to the capture of the final member of the Six have they put themselves out of jobs?  The story takes place in Chicago (obvs.) in the late 1960's.

However, somehow it seemed much older than that.  Although a few of the characters, most notably Katheryn (Radia) with her blonde flip and Mod outfits, made the period obvious, still the generally muted tones of the comic lent it an air of a 1920's noir.

Usually, I would never say that a book required more action scenes.  I'm a fan of text in comics, I like to see a story happening, not just an endless battle.  But, in the case of C.O.W.L. I was utterly bored by the endless discussion of political movements and backstabbing bureaucratic crap that seemed to be at the forefront of the book.

The characters do seem like they have some interesting stories to tell, but sadly, they were far in the background and didn't get the chance to shine.  My favorite by far was Radia and I cheered for her as she got sick of being treated like nothing more than a "bit of skirt" and decided to take on the mob pretty much on her own.  Her power is definitely the best depicted in the comic, which I really appreciated.

Of the other super heroes, it was really hard to even distinguish them some of the times.

Finally, the A on Arclight's uniform?  It doesn't actually stand for Arclight.  It stands for Ass.